I needed the perfect summer treat for a pool party I was planning; something light, tropical, and delicious. I’ve baked plenty of coconut cupcakes, but I wanted something more. I researched 20+ pina colada cupcake recipes, but none of them had everything that I wanted. I was looking for something with rum, vanilla, and citrus undertones, with a strong coconut and pineapple flavor that was unmistakable. Instead, I found variations of vanilla cupcakes with some pineapple chunks, or coconut cupcakes with some lemon and pineapple frosting.

If you’ve gone through this situation too, STOP HERE. This recipe has everything you’re looking for. It’s light, perfectly moist and fluffy, and it really does taste like a cocktail. I spent weeks perfecting this recipe, adding more of this and that, until it was perfect. I used a combination of cake flour and all purpose flour, both lemons and limes, brown sugar and white sugar, etc. It took an exact balance to create this cupcake, and the end result is spectacular.

I used my own Tropical Pineapple Cream Cheese Frosting for this recipe, which compliments the flavors of the cupcake perfectly, but you can use any frosting that you’d like. I know there are people out there that aren’t cream cheese frosting fans, so I can also suggest a simple coconut buttercream for you. However, one of my closest friends tried these cupcakes and loved them (and she HATES cream cheese frosting!). She had to admit that the pairing was perfect.

Decoration isn’t necessary for these cute desserts, but it certainly does make them look pretty. I covered mine with shredded coconut and added an umbrella and a straw to hint at the pina colada theme, but you can also use a pineapple wedge, a cherry, or whatever you’d like. A fun tip is to use a vibrant cupcake liner, because the paleness of the cupcakes is balanced out nicely by color. I used a summer-y pineapple/watermelon green and pink liner from Michael’s and it turned out perfectly! 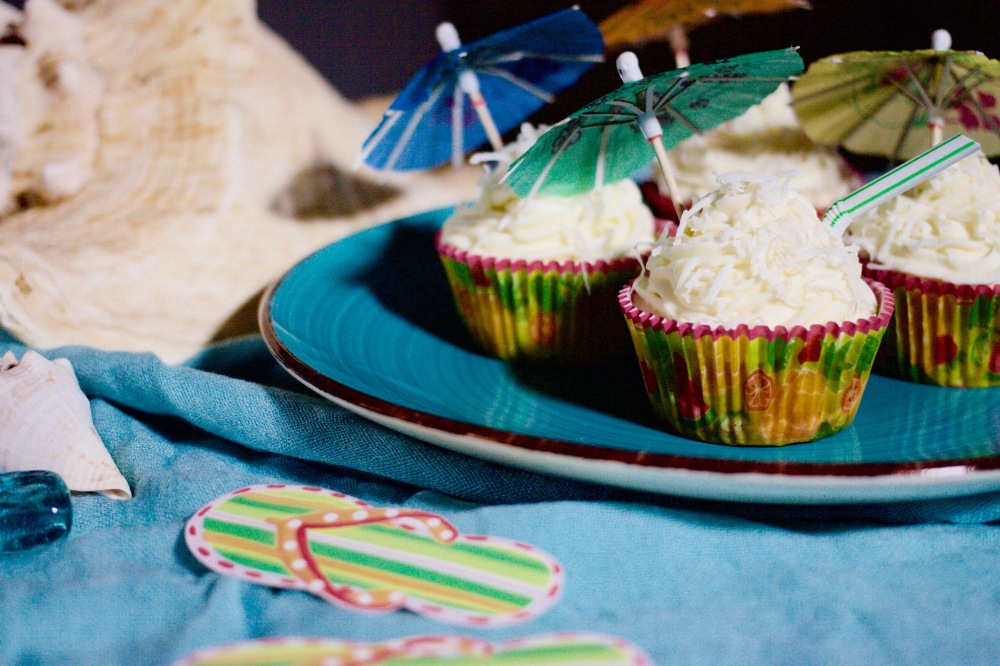 If it’s possible, it’s best not to compromise any of the ingredients for substitutes. Using real rum gives depth where rum extract does not, using coconut milk adds a lightness and better flavor than regular milk, the cake flour gives perfect moistness, etc. If you have to change anything and you have any questions, let me know! I’ll try my best to give you an alternative.

I hope you enjoy these irresistible treats! (They’re my new favorite cupcake!) 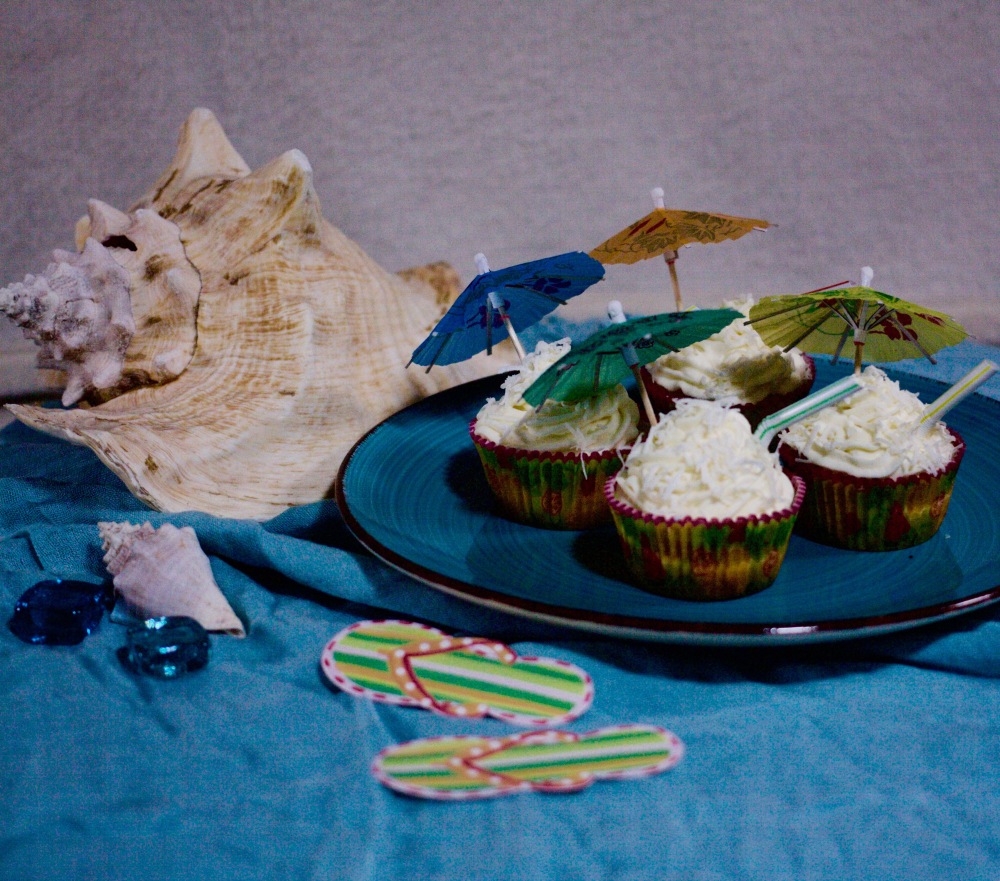 For this recipe you will need 2 cupcake tins, 2 medium bowls, 2 small bowls, 1 large bowl, a whisk or an electric mixer, a zester/grater, a citrus reamer or juicer,  a can opener, 16-18 cupcake liners, and toothpicks (for testing doneness). If you want to decorate, you’ll need about 16-18 straws, umbrellas, cherries, or pineapple wedges.

Preheat your oven to 350 degrees.

Separate your egg yolks from your egg whites. Put the egg whites in a small bowl, and the egg yolks in another small bowl. Whisk each a little and set aside.

In a large mixing bowl, cream the butter, brown sugar, and granulated sugar together. Add the rum, vanilla extract, and oil until well mixed. Add your egg yolks (NOT egg whites). The mixture will look dark and wet.

Using an electric mixer (or a strong arm and a whisk), beat your egg whites until they are light and fluffy. Stiff peaks should form that can stand on their own.

Fold the egg whites, crushed pineapple, and shredded coconut into your batter. Do not overmix; just allow everything to be distributed equally.

Spoon batter into the cupcake liners, filling each about 2/3 full. The batter will be enough for 16-18 cupcakes. Bake for 14-17 minutes, watching carefully to make sure they don’t become golden brown. Part way through you may need to rotate your tins depending on your oven, and you should test a cupcake from each tin with a toothpick. If the toothpick comes out clean with bits of fluffy cupcake sticking to it, remove the tins.

The cupcakes should NOT be golden brown. They will have a gold color to them, but for the most part they will look like vanilla cupcakes on the outside. Immediately remove the cupcakes from the tin and set on a wire rack to cool. These cupcakes are delicious fresh out of the oven or with frosting, and I hope you enjoy!

Leave comments if you have any questions or suggestions! 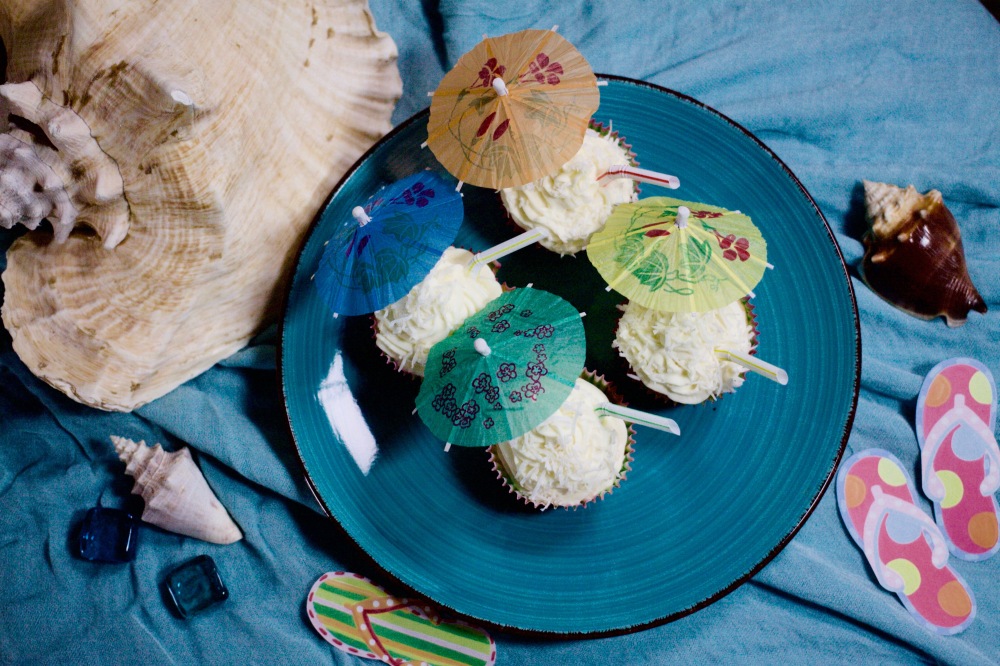